When scuba divers discuss good wreck diving locations, the U.S. Great Lakes are often overlooked. There’s good reason for this. The Lakes, which are located in northeastern part of America at the border of the United States and Canada, are a long way from the warm ocean dive sites that most divers visit.

Though they are called lakes, these 5 distinct bodies of water (Lake Michigan, Lake Huron, Lake Ontario, Lake Superior, and Lake Erie) are actually very large inland seas. Together they account for the largest collection of freshwater in the world, and have supported major freight and passenger transportation for centuries.

The Great Lakes actually have some of the best shipwreck diving locations in the United States for two primary reasons. The wrecks found here generally maintain their structural integrity longer than salt water ocean wrecks.

The fresh, cold waters of the lakes are an ideal environment for preserving shipwrecks because they lack the high corrosion rates and destructive biological activity of salt water environments. There are also plenty of wrecks to explore. The large volume of ship traffic and notoriously unpredictable and harsh weather have led to an untold number of lost ships.

While great wreck diving sites are found throughout these areas, Thunder Bay in Lake Huron stands outs for having an unusually large and diverse collection of well preserved shipwrecks. Thunder Bay is located near the City of Alpena, Michigan on the northeast coast of Michigan’s lower peninsula and is about a four hour drive north from Detroit.

Thunder Bay borders one of the most treacherous stretches of water within the entire Great Lakes system due to its shallow rocky shoals, unpredictable weather and congested shipping lanes.
Thunder Bay National Marine Sanctuary spans 448 square miles and protects one of best-preserved collections of shipwrecks in the United States.

The Thunder Bay National Marine Sanctuary is jointly managed by NOAA and the state of Michigan and was put in place to protect the area’s historic shipwrecks for future generations through research, regulation, and education. Over 200 shipwrecks have been discovered in and around Thunder Bay and they include schooners (sailing vessels of at least two masts), side-wheel steamers, and freighters as long as 450 feet.

The wrecks of Thunder Bay offer diving opportunities for all scuba skill levels. They range from shallow shipwrecks appropriate for recreational scuba divers to deep technical dives. Even in the summer, this is cold water diving. Water temperatures are generally in the 40-50 degrees Fahrenheit range, so a 7-mil wetsuit or drysuit is recommended.

The diving season generally spans May through October, though conditions are best during the early summer months when visibility can reach 100 ft. Dive lights are also beneficial, both for looking into dark areas of shipwrecks and to increase visibility in general.

Here’s a sample of some popular Thunder Bay wreck dives.

What is your favorite wreck dive?
Let us know in the comments below 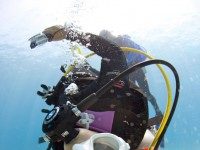 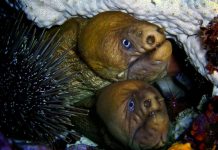 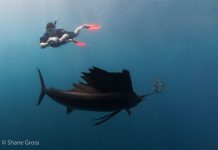