I am cruising along the wall. My buddy and I are having a leisurely dive.
My camera is out in front of me and I am using my mounted torch to scan the wall. A shape and some color makes me stop and edge closer to the wall slowly.

It is a Moray Eel. Peeking out of the rocks – moving slowly backwards in to its small space when my light catches it. Looking a whole lot more scary than what they really are. Moray Eels are a common sight when scuba diving around New Zealand and one of my favorite photographic subjects.

Most of the time they are tucked into a hole or crevice with only their eyes and mouth in view and will sit very very patiently while I flash bright lights in front of them. Sometimes, they are out and about but usually it seems they are moving in the opposite direction from me!

I love their expressions; the softer, more innocent smiling Grey Moray to the aggressive long snout and evil eye of the Mosaic Moray. A Moray eel is a vertebrate – or a “bony fish” however the number of bones in the skull is dramatically decreased from that of fish.

Moray Eel on the hunt

They will wait until their prey is close enough and then they will lunge out and clamp their jaws around their intended prey – most often fish, molluscs and crustaceans. They are opportunistic omnivores – catching what they can.

Moray’s have extremely small gills with no covering so the sight of a wide mouthed Moray eel in a crevice can be daunting until you understand that the opening and closing of the mouth is not a defensive warning but rather the eel is simply breathing.

As they tend to retract themselves backwards and hide from humans when we are taking photographs, much patience can be required.

Although the eels appear to be vicious and ill-tempered, they cannot see or hear very well and rely on their strong sense of smell. If you are bitten by one, the reaction is to jerk your hand backwards which you want to avoid. This will cut you further and some species have backwards facing teeth which prevent its prey from escaping from its mouth.

Some Moray eels carry bacteria on their teeth and parasites from other fish or microbes from the water. Secondary infection is possible so clean the wound, disinfect it, keep it dry and seek medical advice.

Moray eels are most active at night.
If you are night diving near boulders, cracks, rocks or crevices, have patience and wait in the same spot for a small period of time. Chances are you will see one of the following out and about.

There are five species of Moray’s found in the north-eastern part of New Zealand;

The Yellow Moray (Gymnothorax prasinus) is New Zealand’s most common Moray – however it is not found in the South Island and is apparently less common at the Poor Knights Islands. Yellow Morays feed mainly on crustaceans and actually use cleaner shrimp to ensure that their teeth are clean and free from parasites. The colour can vary from green-yellow to yellow to a brown-yellow and some eels can have extremely blue eyes.

The Grey Moray (Gymnothorax nubilus) looks to be the most placid.
It is the smallest and most slender of New Zealand’s Morays and has a distinctive dorsal fin which is rather tall for its relative size.
It has a much longer snout and is overall much narrower than a Yellow Moray for instance and is therefore more suited to probing into narrow cracks and fissures to find its prey of crabs and shrimps and very small fish.

The Spotted Moray (Gymnothorax prionodon) is most common further north. Relatively uncommon at the Poor Knights Islands, they are more often found near the Cavalli Islands. The Spotted Moray has a dark snout and very clear white spots. It also has long jaws similar to the Mosaic Moray.

It is difficult to photograph. Unfortunately artificial light seems to ruin the camouflage effect that the spots can have and the light also changes the colours of the eel so that it appears very light brown instead of the dark and more natural colour that can sometimes obscure the spots.

The Mosaic Moray (Enchelycore ramosa) looks fierce as it is always seen with its mouth wide open – this is because the Mosaic Moray has teeth in the roof of its mouth and is therefore unable to close it fully. It is a very big and strong eel. Octopus have been sighted as being a meal of the Mosaic Moray on occasion.
Often seen in ghostly white, when the Mosaic Moray is olive-green it is quite well hidden.

The Speckled Moray or Mottled Moray (Gymnothorax obsesus) is one of the largest Moray eels in New Zealand waters.
It has a large but short and stocky snout and very strong jaws. Speckled Morays have been observed to be very aggressive towards each other. Obsesus in name and stance, it has been reported that two of these enormous Moray eels were sighted locked in furious combat.

I prefer to observe and photograph without initiating non-natural behaviours and I am glad I stick to that policy especially when there is video evidence such as this that nature does not always understand our ‘good’ intentions ….

Enjoyed this blogpost about Moray Eels? Sign up for our free newsletter! and get our scuba blogs delivered in your inbox each month. 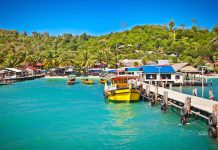 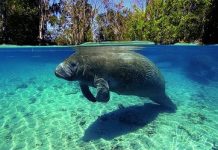