Are You Aware Of These 10 Cool But Random Facts About Seahorses?

In this article, we provide 10 cool facts about seahorses, one of the most intriguing species of marine life. There are no other creatures like them on the planet, and people of all ages are amazed by how these animals look, behave, and move beneath the waves. 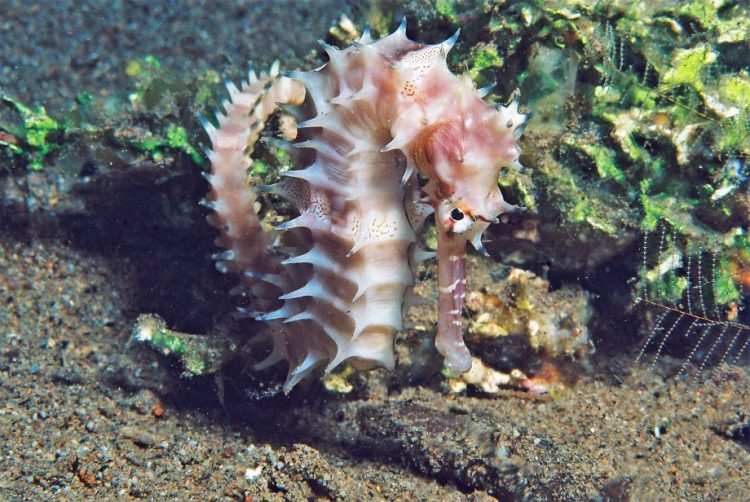 Did you know around 53 different individual species of seahorses exist in the world? They all look different from one another, but they do share the same characteristics that make them seahorses after all.

Here are 10 cool but random facts about seahorses.

The way seahorses reproduce is very different from how the vast majority of other species procreate. When they’re ready to mate, the female seahorse will deposit her eggs into the male’s pouch, which is found in his abdomen. She can leave up to 50 eggs there. It’s up to the male to carry those eggs until they’re ready to be born.

This allows the female’s body to begin producing more eggs right away, which ensures that she’ll be able to mate again sooner rather than later in order to keep the species alive. Once the babies hatch, they’re released from the male’s abdomen. They’ve fully formed babies, and every mating can result in up to 1,500 seahorses.

Seahorses may not look anything like your typical fish, but they actually are classified as fish. Characteristics that make them fish include a swim bladder to control buoyancy, gills to breathe, and fins to propel them through the water.

Every seahorse has a fin on its back, which it uses to propel itself through the water. Pectoral fins located close to the back of the head are what the animal uses to actually steer itself in the right direction.

Seahorses really love to eat. They feed almost constantly on tiny fish and plankton. The reason that they have to keep eating all the time is that their digestive systems work so quickly. Food passes right through them, so they need to continue consuming in order to stay alive.

In fact, they can consume up to 3,000 brine shrimp in one day. Unlike other species, seahorses don’t have teeth or a stomach, so their digestive processes are very unique.

4. They Mate for Life

Seahorses find a companion that they’ll stay with for life. They’re monogamous creatures, meaning they only mate with one other seahorse for their entire lives. Their unique courtship includes dancing with one another, displaying a variety of colors, swimming alongside one another, and spinning around each other. This can last up to 8 hours.

Fact #5 in our list of cool but random facts about seahorses: camouflage skills. These creatures are experts at hiding themselves amidst the coral reefs where they live. Some species can actually change the color of their bodies to blend in, while others are already built with the right color, shape, size, and texture to blend in perfectly with the corals. 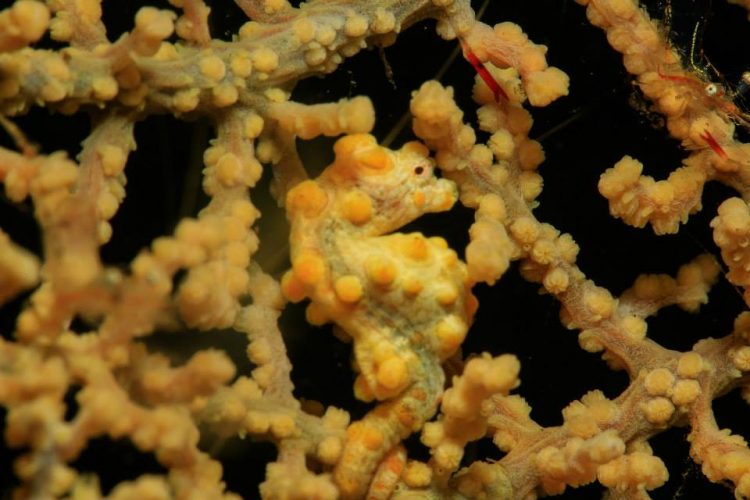 6. They Use Their Prehensile Tails a Lot

Seahorses are actually pretty bad swimmers. What makes them really different from other swimmers in the sea, however, is that they swim upright. And when storms hit, these delicate creatures can actually become so exhausted that they can die as a result.

But they’re really good at anchoring themselves to corals and grasses, thanks to their prehensile tails that allow them to stay steady and eat despite strong currents.

When fighting over mates, territory, or food, seahorses use their powerful tails against one another as their main weapons. But when they get along, pairs of seahorses can be seen swimming together with their tails linked.

7. Even Though They’re Fish, They Don’t Have Scales

Seahorses do not have any scales. Instead, they have an exoskeleton that consists of hard plates that are fused together.

8. Their Eyes Work Independently of One Another

Seahorses have a great sense of sight. Their eyes can work independently of one another as well so they can be aware of their surroundings at all times. In other words, while one eye is looking forward, the other can be looking behind.

9. They Have Their Own Version of Fingerprints

Just as every human has a unique set of fingerprints, every individual seahorse has a defining characteristic. A small crown, referred to as a coral net, is different on every seahorse in both its size and design.

10. They Don’t Have Many Predators

The seahorse is too bony and indigestible for the majority of species that it shares its home with. Therefore, it doesn’t have many predators to worry about. Crabs, however, are a major threat. And the other major threat to their survival is humans, who harvest them at faster rates than they can reproduce.

This brings us to the end of our list of cool but random facts about seahorses.

What are your thoughts about Seahorses? Do you like them? Let us know in the comments below

5 of the Best Caverns for Cenote Diving You Should Dive

5 Amazing Shipwrecks of the Red Sea You Should Dive