Do you want to go shark diving in Galapagos? Of Course, you do! Diving with sharks in Galapagos is one of the main reason you should plan a trip to these remote islands at least once in your life. 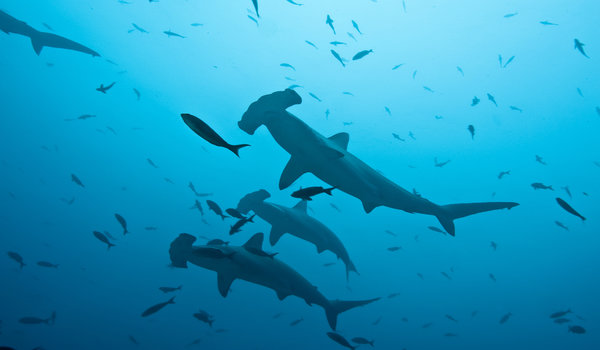 The Galapagos Islands are not your typical dive location, and it is not easy to get there, but you will be rewarded with epic dives you will not be able to do anywhere else in the world.

Gain more insight into when to go, what marine life you can expect and how to get there with our Galapagos Scuba Dive Guide.

The reefs of Galapagos are abundant with marine life

The water’s of the islands have over 400 species of fish about 17% endemic to Galapagos only. Drift dives take you past walls, sometimes out to the ocean and back. You will see the world’s only swimming lizards, dolphins, seals, and sea lions.

Many Whales also migrate to the islands including the pilot, minke, and blue whales. As wonderful as that is, the draw for many divers is the fact that almost every dive in Galapagos is a shark dive. The island chain is the home of 12 shark species. Some are year-round residences and others migratory.

When you travel to Galapagos, and you will make day dive trips around the central islands or you plan to go on a liveaboard to the remote Islands of Darwin and Wolf, either way, you can be certain you will be diving with a number of different species every day.

The most common sharks you will encounter when diving in Galapagos

The pure thrill though of diving with sharks in Galapagos is kept to those who take a liveaboard and head north to the Wolf and Darwin islands.

Read on to learn which sharks (besides the most common) you can expect to see when you go shark diving in Galapagos.

Also read: When you should visit Galapagos to dive with Hammerhead sharks?

Dive with hundreds of Scalloped Hammerheads in Galapagos

Each year hundreds if not thousands of scalloped hammerheads migrate to the islands in the north of the Galapagos Archipelago. These sharks feed best in groups, and it is not uncommon to come across schools numbering more than 300 sharks. These slow moving “clouds” will cast a shadow over a dive site that will remind you of a solar eclipse.

Seamounts that rise from the abyss to or near the surface will attract Hammerheads. The Galapagos Islands meets that definition. Scalloped hammerheads are considered coastal pelagic species, which means they typically follow near the edge of the continental shelf. This allows them to dive deep when they want and return shallow to eat. They are often found as deep as 1,000 feet.

Smooth hammerheads and great hammerheads are also found in these waters but in much smaller numbers. A large number of sharks stay until around November when some of them start to migrate. A sizable population of hammerheads does stay year round.

Find and ID the Dusky shark

The Dusky shark is found in large numbers in the islands. However, it is often confused with the Galapagos shark. The differences in appearance are so subtle that the average diver will not be able to tell the difference; even a trained marine biologist might not be certain. The descriptions that apply to the Galapagos shark equally applies to the dusky shark. The Dusky shark is frequently found in the central islands as well.

The White-tipped reef shark is the most common shark found in Galapagos and can be found on almost every Galapagos dive site. They are slow moving, not aggressive and they can often be seen on shallow reefs and will reach a length of about 5 feet (1.5 meters)

As long as it is not cornered, it will move away if it feels threatened. The white tipped reef shark is a night hunter and spends its day sleeping. Caves and overhangs are their most popular choices to rest, but they will also make themselves at home on the reef or a patch of sand.

It is not uncommon to see white tips sleeping on top of each other. They are homebodies as they will stay in the same range for months even years at a time. Blacktip reef sharks and gray reef sharks are often found in smaller numbers around the white tips.

Despite its name, Galapagos sharks are found in a wide range of tropical waters. They are found in large numbers in the northern islands as well as Gordon Rocks off the north coast of Santa Cruz. They often gather in large groups and will be the most abundant species on a reef. With an average size of ten feet (3 meters) and an aggressive attitude, they dominate over the other species of sharks found in the area.

The Galapagos shark spends the majority of its time in deeper waters but is often found in the shallows. Pregnant females will stay in shallow waters (82 feet or 25 meters) for a time before giving birth to between 4 and 16 pups who are 2.–2.6 feet long ( 61–80 cm). These juvenile Galapagos sharks will stay in these “nurseries” until they are big and strong enough to survive in open water.

While only one fatal shark attacks have been attributed to the Galapagos shark, it is considered highly aggressive and a hazard to divers. It is not one of the four considered dangerous to humans, a subtle difference but an important one. 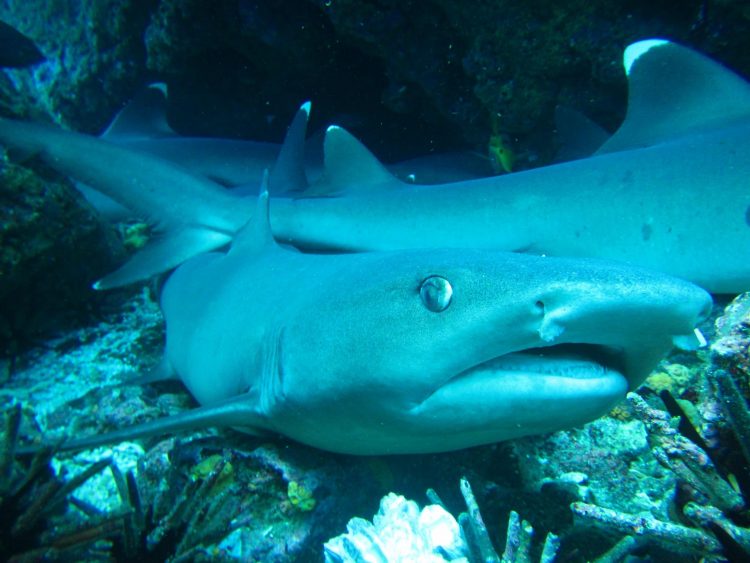 A white tip reef shark resting on a shallow reef

The typical advice to divers of hitting a shark on the nose will make matters worse. When driven off physically, they will retreat but act like a gang member. They leave but then come back aggressively with help. Divers should be well briefed on understanding the signs of aggression and the best way to withdraw. Divers acting passively will seldom see a Galapagos shark become aggressive.

The International Union for Conservation of Nature (IUCN) has assessed the Galapagos shark as near threatened, as its low reproductive rate limits its capacity to withstand population depletion.

Last but not least

When you are into shark diving, you will love diving Galapagos. There are 12 species of sharks found in Galapagos and every dive in Galapagos can and probably will be a shark dive.
Many shark species are found at dive sites closer to the mainland. When you want to experience an actual Galapagos shark dive, you should sign up for a liveaboard trip to visit the more remote Island of Wolf and Darwin. This is where you can expect to dive with hundreds of schooling hammerheads and even Whale Sharks (within the season) between June through November every year.

Feel free to contact us. We have multiple partners in Galapagos who offer shark dive packages.

When is The Best Time to Dive with Mola Mola in Bali?