Do you use the right fins for your diving style? Many dive centers suggest or even require that the student diver purchases their mask, fins, and snorkel before they start their course.

Often the focus is on the mask as a properly fitting mask will make your learning process much smoother. Fins are usually just purchased based on fit and maybe whether to get open heel, or closed heel might be a consideration.

This lack of concern about what to buy when you purchase your first scuba gear is probably one reason that fins are the item most likely to be replaced first. 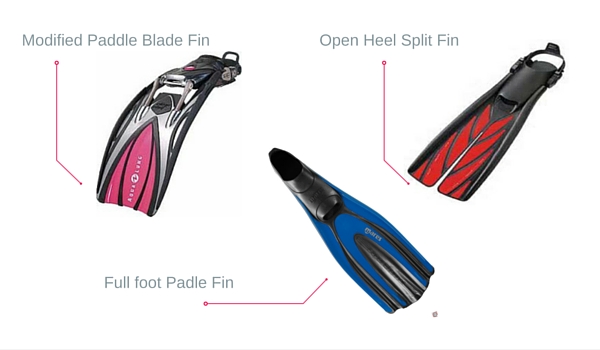 Choose the fin that fit your diving style

Yes, you can go by looks and official specs, but to really be happy with it, it must fit you and your style.

You will often hear that the full pocket or full foot fin is for snorkelers and open heel fins are for divers. You will also hear contradictions that say that the open heel is for cold water diving and the full foot is for tropical water diving. Like anything else there are variations.

What to Choose: the Foot Pocket or Open Heel fin?

The full foot fin, fits like a shoe, so it is important that it is a good fit. The open heel is designed like a slipper with a strap. The foot slides into a pocket, and a strap goes over the heel that holds it in place. This type of a fin is worn with booties made of neoprene.

The full foot fin when properly fitted allows for a more efficient transfer of power from the legs to the fin. However, a poor fit can lead to blisters, and you could even lose your fin along the way. Additionally, the full foot fin is not recommended for cold water diving because your bare foot would be exposed.

Also read: 6 Helpful Tips To Help you Prevent Your Scuba Mask from Leaking

The open heel fin seems to be more popular even in warm water diving locations. Fin manufacturers reflect this belief in that they offer more different models in the open heel version. While the foot pocket must still be a good fit, the compression of the neoprene in the boot means that the fit is not as critical as with the full foot design.

You could also change the thickness of your boots if you are diving in waters of different temperatures. As mentioned before the full heel is touted as a tropical water fin, many divers still prefer the extra protection the booties give over the bare foot.

I am sure any visitor to a tropical beach under a brutal sun will remember their burning feet. Also entering or exiting a surf on a rocky or coral beach is safer with the boots on. Many divers are also more comfortable entering a boat from the water with boots on and being on deck.

Which Type of Fin Should you Choose?

There are basically two fin blade styles, and those are the paddle and the split fin. In recent years, some fin manufacturers included a subclass of the paddle as a modified paddle.

Paddle Blade Fin:
The paddle fin is the most common style of blades and is the same as they were 50 years ago at first glance. While the materials have changed and small design changes have resulted in remarkably improved efficiency, the blade is a solid piece that connects back to the foot pocket.

The paddle design works to propel you through the water with a fin that is relatively inflexible or stiff. The stiffer the fin, the more effort is needed to get started. While they do require the most muscle, they provide good power.

Also read: 6 Reasons Why Scuba Divers Are Fitter Than You are!

So-called channels in the fins help direct the motion of the water allowing a smooth transfer of power between the downward kick and the upward kick which has little effect on propulsion. The Mares Avanti Quattro and the Aqua Lung’s Stratos Adj are examples of the full paddle style fin.

The Modified Paddle Blade Fin:
Modified paddles do not have the blade extending the full width back to the foot pocket. Different designs have cut outs close to the foot that reduces effort on the upward kick. Using various materials over the different areas of the fin allows a more flexible fin that is more efficient.

The Seawing Nova by Scubapro is an example of a modified paddle. The paddle is a separate looking piece attached to the foot what looks like two stalks which remind me of a Star Wars pod racer.

The Split Fin:
The split fin is a design that is relatively new, and many divers swear they are the best that happened to humankind since the invention of light.

The blade is very flexible and is split down the center. As you move the fin through the water, it acts more like a propeller than a paddle. The flexibility of the fins creates a stream of water like a vortex of a propeller or the force of a jet.

Some manufacturers and divers who use this style of fins claim that the fins improves their dive times as much as 40%. The Atomic Aquatics Split fin and the TUSA X-pert Zoom are examples of popular split fins.

The split fins require much less leg muscle to create the same amount of speed than either of the two types of paddle blades. This is because the split fin is the most effective when using a rapid shallow flutter kick.

This style kick can produce speed but is not efficient for power. So divers finding themselves in an unexpected current would be at a disadvantage when using these fins. Also, they are not as maneuverable and not as effective with other kick styles. A rapid flutter kick should not be used in silting type conditions such as muck diving or wreck diving.

Should You Test New Fins Before You Buy Them?

Yes, you should. You would not pluck your money down for a sports car without taking a test drive, nor should you for your fins. When you are considering buying a set of fins, try a few different models before you decide which style fin is best for you.

Take into consideration where you dive and how. Should you get the better control that a full foot fin offers or do you like the point of wearing boots? Do you dive in current free waters and a kick style that will increase your dive time if using split fins, or do you need the raw power of a full paddle? Research, try, compare and make an informed purchase.

Wrist vs. Console Dive Computers | What You Need to Know

Four of the Best iPhone Apps for Scuba Divers