Lionfish are an invasive species that has taken over reef ecosystems in the Atlantic and Caribbean, causing them damage and destruction.

The lionfish is a hot item in SCUBA current events. Though beautiful to observe, this fish has infiltrated a marine ecosystem it does not belong to, causing devastating effects to coral reef systems in the Atlantic along the eastern cost of the US and the Caribbean.

Local government and environmental agencies are encouraging SCUBA divers to actively hunt and kill the lionfish, which as it turns out, is a rather tasty fish that can be prepared in a variety of ways.

There are several theories as to how the Lionfish came to be in the local environment. One such theory is that the invasion was facilitated through the destruction of a southern Florida aquarium during Hurricane Andrew in 1992.

Another tells of lionfish being accidentally released following the hurricane, and yet another proposes aquarium owners were deliberately releasing them into the sea, unsatisfied with the way the fish performed in the aquarium. Still others claim to have spotted the lionfish on local reefs even before Hurricane Andrew.

The lionfish has been able to reproduce at such profuse levels due to certain crucial factors:

Lionfish all over the place

They have no natural predators on the reefs of the Atlantic and [Caribbean](. Any creature that sits at the top of the food chain, unchecked by nature, will enjoy the privilege of populating an area with its own species. But this can have disastrous implications for the area as the system becomes more imbalanced.

Up to 6 species of fish have been found in it’s stomach at one time. They are aggressive and skilled hunters, using specialized characteristics of their bodies to stalk and overtake prey, which they do in one giant swallow.

Within 3 days they are competent swimmers, and capable of capturing and consuming small prey. Within 20 – 40 days, the juviniles begins its metamorphosis to adult. The females can repeat this process on a monthly basis with no set breeding season. 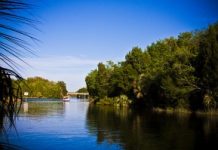