While the Philippines are still developing as a dive destination, divers now make up 15% of the international tourists arrivals. Diving the pristine coral reefs surrounding one of the 7,107 islands with enormous bio-diversity is becoming more popular with populair with scuba divers from around the globe.

The scope of diving in the Philippines covers the full range of warm water diving. Portions of the country can be dived year around with the best times being November to June. The biggest challenge in planning a dive trip to the Philippines is deciding which destination to leave for a later trip. Rest assure once you dive the Philippines you will be back.

In this article we randomly share our point of view on what we think are the 5 best dive destinations in the Philippines.

Tubbataha Reefs Natural Park is a 97,030-hectare Marine Protected Area (MPA) in Palawan, the westernmost Philippine province. That is about 375 square miles. The park has two main coral atolls – the north atoll and the south atoll – and north of north atoll is the Jessie Beazley Reef.

Combined the reefs have an area of over 10,000 hectares about 39 square miles. There are no inhabited islands within the park, with the nearest inhabited island being over 120 kilometers away.

Divers visit the reef by way of liveaboards departing from Puerto Princesa City, which is 150 kilometers away. Liveaboard operators are granted permits for either 5 or 7 days and this includes the transit time. Private vessels may also apply for permits and can be granted a 7-day permit that cannot be renewed.

Tubbataha Reefs Natural Park is considered the center of marine biodiversity and scientist has shown it is the home to no less than:

The Tubbataha Reefs Natural Park is subject to strong currents and should only be dived by divers who are experienced in such conditions.

The diving season is limited to mid-March until mid- June, at other times of the year the weather can become deadly in minutes. The north atoll even rates a photosphere on google earth, it includes a sea turtle

Strangely Apo Reef is often called the Mini-Tubbataha. Most people consider [Tubbataha the larger reef] , however that is not accurate. Tubbataha is longer, but the Apo reef’s larger width x its shorter length still produces a larger area.

Plus it is an overnight transit to the dive sites of Tubbataha, while Apo Reef can be visited on a day trip from close by resorts. While a trip to Tubbataha is a week-long excursion, a mini trip to Apo Reef only needs a few days.

The Apo Reef National Park was founded in 1996 and is the largest reef system in the Philippines covering over 1150 square kilometers or about 450 square miles.

The marine life on Apo Reef is healthy and abundant but is slightly less than Tubbataha reef, however, you may need to be a marine biologist to tell the difference. Diving is available year round, however, storms can cancel days of diving.

Puerto Galera as a dive destination often makes the top ten list of the best destinations in the world. With over 40 dive sites, In lists of the world’s best dive sites it is not uncommon to see two or even three sites mention in the top 25.

Puerto Galera is the most frequent dive destination for international tourists. While still diving centric, the tourism industry in the area is more developed than in most other dive destinations in the Philippines.

Ground transportation from Manila takes about three hours and then a 30 minute ferry across the Verde Passage. The name comes from the Spanish, who used to use the area as a safe haven for its galleons caught in typhoons. 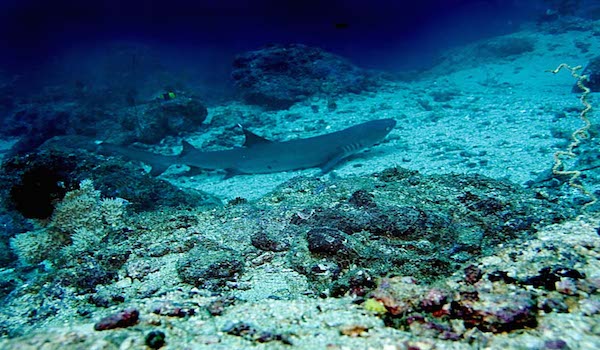 White tip reefshark on a reef at Puerto Galera

The dive season is year round with some influence by the weather. Verde Island and sites that are facing the Verde Island Passage are subject to strong currents, and can only be dived from about November to May.

The Verde Passage is another section of the coral triangle noted for the bio-diversity. Scientific research is almost constant and new discoveries are common.

The La Canyons (really three canyons not one), Sinandigan Wall, Hole in the Wall and Verde Island are all frequently found listed among the best sites in the world.

Dive with Thresher sharks at Malapascua

Located a two hour drive (four by bus) from the city of Cebu at the northern tip of the island lays the town of Mayo and offshore the island of Malapascua.

Malapascua Island is an island whose reputation is larger than the island itself. The island is small, only about 1.6 km long and .6 km wide, however it is the place to go to dive thresher sharks.

There are more than twenty dive sites surrounding the island with Monad shoal as the source of the island’s reputation. The shoal, which is as large as the island, ranges from a depth of 200 meters and reaches to about 18 meters of the surface.

A twenty minute boat ride early in the morning brings divers to the shoal, which has a number of “cleaning” stations. Near sunrise is the peak time that the Cleaning stations attract rarely seen thresher sharks.

Divers wait near the stations for the sharks to rise from the depths and approach a station.

It is not uncommon to be able to see a shark in the depths waiting their turn. While Thresher sharks are the star clients of the stations, manta rays are also frequent visitors as are numerous other species of sharks and other pelagic.

Gato Island about an hour boat ride is another impressive dive site.

Known for its excellent coral cover and being a great place to see sleeping white tip sharks, diver can swim around the island or under it. Advanced divers are allowed to follow a tunnel that exits on the other side of the island.

The lighthouse reef is an unusual twilight dive, where Mandarinfish do a nightly mating dance. A white sand beach at the southern tip of the island called Bounty Beach was the island’s tourism draw in the 1990s.

Backpackers would enjoy the typical island fishing settlement and the beaches. Today, backpacker’s still visit the island but they share the beach and waters with scuba divers.

Adding Subic Bay to this list might raise the eyebrows of some diver’s familiar with diving in the Philippines, but not to those who have dived Subic Bay. You see, the Department of Tourism (DOT) does not recognize it as one of the top dive destinations in the country.

Even the PCSSD, (Philippine Commission on Sports Scuba Diving), whose mission is to improve the country’s dive industry and make the Philippines a diving capital pays little attention to the area.

Prior to 1992, Subic Bay was the home of a US Navy base so diving was not available in the Bay. When the Navy left, the bay was still in poor health from the eruption of Mount Pinatubo the year before.

Still, a few foreign dive operators saw the potential and open diving. The draw to Subic was the number of wrecks at that time known were 15. However, local divers were not interested having been trained in crystal clear waters in other parts of the country.

Subic Bay is a protected deep water bay and is known for its wrecks.

Twelve is the number of wrecks frequently claimed and all the dive centers dive those twelve wrecks. However, you can add another half a dozen if you include the sites that are not frequently visited, and more than a dozen wrecks reserved for tech divers.

These are all within the protected waters of the bay. If you include all the wreck sites both technical and recreational and extend the range to one hour, the number exceeds fifty.

Some dive centers are creating small artificial house reefs using small boats as a part of the site. “New” wrecks are also being discovered. Last year, a WWII Japanese “Betty” bomber was added to the dive sites for deep divers and technical divers.

Subic Bay’s best dive is the USS New York, ARC-2 built in 1893 and was scuttled to prevent capture in WWII in December 1941. A Naval architectural milestone of her era, she was the most advanced ship of her time and was the standards others would be measured against until after WWI. She often rated as the best shipwreck dive in South East Asia, and the most frequently dived.

Also read: Your Valuable Guide To The Great Antilla Wreck Dive in Aruba

There are many other dive sites and destination that deserve to be on this list but then it would not be the five best.

Coron island is considered the diving capital of the Philippines by some instead of Subic. Coron has a number of wrecks in crystal clear waters that attract many divers. Most are Japanese WWII vessels. Barracuda Lake also in Coron is legendary in its own right.

Sharp thermocline and a dramatic underwater landscape make this a noteworthy site. Apo Island in Dauin, Negros Oriental has an international reputation and is well worth a visit.

Ticao Pass in Ticao, Masbate also known as the Manta Bowl is a great place to hang out and watch the manta’s go by.
Seasonally it the same pass that whale sharks use. So select some for your first trip and start planning your second on your way home.

Have you visited and dived one of these dive sites in the Philippines? Let us know in the comments below

Feel free to contact us. We have multiple partners that offer dive packages + accommodation and scuba lessons in the Philippines

When is the Best Time to Dive with Manta Rays in Costa Rica?

Why Diving Nusa Penida Should Be on Your Bucket List?

5 must do scuba dives in western Australia