Scuba diving with sharks can be both exhilarating and terrifying, but maintaining your composure is key to staying safe and enjoying these majestic creatures.

Keep in mind that the majority of shark attacks on humans are simply the result of them mistaking you for another animal.

These cases of mistaken identity can make you a statistic and give sharks a bad reputation.
But, again, by knowing what to do and what not when scuba diving with sharks, you can fully enjoy the experience.

Remember, too, that the majority of sharks you’ll see on a scuba dive will keep their distance from you and behave non-aggressively.

Other sharks may instead be curious and approach you. If you do encounter a shark that begins exhibiting (aggressive) behavior, how you respond will make the biggest difference with regards to the outcome of your encounter.

Continue reading for five basic guidelines when it comes to safely scuba diving with sharks.

No Shiny Things Allowed when Scuba Diving With Sharks

Any scuba gear that’s brightly colored, shiny, or flashy in any way should be avoided when swimming in an area that could have sharks in it.

Shiny materials can attract sharks that end up mistaking you for a fish with shiny scales glistening against the rays of sunlight in the water. Stick with dark or matte metals, as well as black or blue wetsuits and gear.

It’s vitally important that you remain as calm as possible when scuba diving with sharks, especially since erratic movements can actually get a shark’s attention and provoke it.

Therefore, swim gracefully and calmly, just as you would if you were only surrounded by schools of small fish and coral. This will ensure your safety as you observe the sharks in their natural habitat without disturbing them or drawing attention to yourself. Follow the scuba code of conduct and you’ll be safe and sound.

Spearfishing around sharks is a bad idea, as it will draw attention to you, especially as the blood comes out of the fish you’re catching. If you begin Spearfishing without sharks in the area, but your activities draw them in, it’s best to let go of whatever you have caught and head back to the surface and onto your boat.

Swim with Purpose to the Right Areas

If you spot sharks in the water, you want to avoid the water column and the surface, as this is where the majority of sharks will hunt. Swim with speed and purpose to the bottom of the dive site or to the reef. After your scuba dive adventure is over, you should do the same to get out of the water.

Swim with purpose and enough speed to move to the surface, and then exit the water as quickly as possible if there are sharks in the water. This doesn’t mean that you should ignore the safety stop or the maximum rate for a safe ascent.

Always respect sharks and give them plenty of space. Do not, no matter how tempting it may be, pursue a shark from behind, as he may turn around, viewing you as a predator, to attack you in self-defense.

It doesn’t matter how badly you want that great photo or video clip; just let the shark go on its way.
Always follow up advice and local requirements when it comes to scuba diving with sharks.

What are your thoughts on scuba diving with sharks? Would you like to do so or would you pass on the opportunity? Let us know in the comments below.

This article is written by RUSHKULT, the online booking platform for Scuba Diving. Visit the RUSHKULT platform to book your next Scuba Dive training, guided trip, and accommodation.
3.5/5 (13 Reviews) 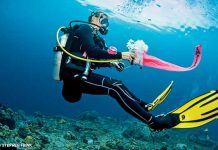