Dive The Wreck of the Superior Producer in Curacao

The wreck of the Superior Producer in Curacao is one of the most popular wreck dives in the former Dutch Caribbean. The ship which was a small freighter that sank just outside the harbor of the island.

USA Today 10 Best wrote: “The Superior Producer is a cargo freighter sunk in 1977 from being overloaded with too much weight. It lies almost perfectly upright at 100 feet (30m) below the surface, where divers can explore its holds and bridge looking for sponges coral great barracudas tarpons schooling fish!”

If you love diving shipwrecks, this is definitely one that you need to add to your must-see list. Continue reading to learn why this dive site is so popular among wreck divers.

The History Behind the Superior Producer

The Superior Producer sank in September of 1977 outside the busy port of Willemstad. The ship was headed towards Isla Margarita in Venezuela. It was filled with alcohol and clothes, which would be used for the upcoming Christmas shopping season.

But because the seas were rough and there was far too much heavy cargo on the ship that ended up shifting out of place, it became impossible for it to stay afloat. Just a little while after the ship set sail the ship began to sink quickly on an even keel.

While this may seem like a tragedy, the people on shore were actually overjoyed because they were able to essentially take everything that they could recover from the cargo on the ship. People donned the clothes and drank up all of the alcohol that did not go down with the Superior Producer.

The story goes that the people who recovered the clothes from the ship gave this to the islanders who really needed it who used the jeans, shirts for years to come.

The wreck is home to a variety of corals and sponges, as well as an abundance of fish. In the dim light, blackbar solider fish lurk in the shadows, while angelfish and sergeant majors are found on deck. Barracudas are quite common, but they’re not as prevalent as tarpon, another big silvery fish. Tarpon on this location are so enormous that divers frequently confuse them for sharks. You can stay at an adjacent coral reef during your ascend, where you’ll find damselfish, wrasse, and file fish.

It is easiest to dive the wreck from a boat, but it is possible to do so from land since it is only 450 feet off the coast of Otrobanda, Curacao. There are frequently mild currents on the site.

The Location of the Superior Producer Wreck 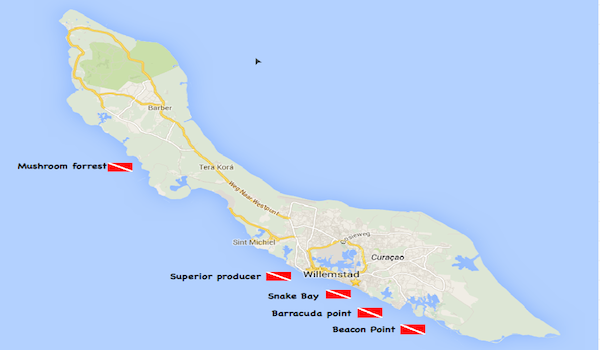 The wreck of the Superior Producer in Curaçao is found sitting upright in about 30 meters, or 100 feet, of water. It is easily found about 60 meters, or 197 feet, off the coast of Otrobanda.

It measures roughly 50 meters, or 164 feet, in length, so it is definitely a sight to behold at the bottom of the sea, and as you approach it, you will begin to see its vast shadow taking shape.

The Superior Producer Wreck dive usually is a shore dive Expect to do a surface swim of 5 to 10 minutes before you get to the mooring that is attached to the ship. Since the wreck lies so close to the actual cruise terminal boots are not allowed to get to the dive site.

The sunken ship is adjacent to Curacao’s big piers and merchant ships are frequent in the region. The site is not accessible when cruise ships are in port due to its proximity to the mega pier. If you want to explore the Superior Producer, be sure to avoid October through May, when cruise season is in full swing. — It’s always a good idea to double-check with a local dive business before you depart.