The Great Blue Hole of Belize, hearing those words will bring a rush of images to a scuba diver’s mind. The Blue Hole dive is the most famous dive in Belize and is known as one of the best dives in the world and is probably the most recognized dive site by non-divers.

Let’s be clear about one thing, diving the blue hole in Belize is “awesome” and if you have the chance to dive it you should. Like anything worthwhile doing in life, a little inside information is always nice. In this article, we will share what we learned about the different options on how to get there and how to dive this fabulous die site.

What Is a Blue Hole?

This seems a simple question. However, there are scientists whose specialty is trying to answer it. We will restrict the answer a little and keep the focus on the Great Blue Hole of Belize.

We can say that a Blue Hole and it’s closely related land-based cousin a sinkhole a.k.a a Cenote are climate change and evolutionary science time capsules, they can clearly show u the effects that changes in environments have on land masses.

There are two steps to the creation of a Sink Hole or a Blue Hole.

First, there needs to be a hollow subsurface space followed by the collapse of the spaces roof. The space such as a cave or cavern is created by the effects of erosion or by Carbonate dissolution, which is a chemical process. Strata, such as limestone and sandstone which are porous, are easily reduced by both of these methods leaving a void behind.

The second step is where the roof of the cave or cavern can no longer support its weight. In nature, this happens when the erosion or carbonate dissolution process has weakened the structure of the roof. Earthquakes have been known to accelerate the weakening of a roof. If the top of this sinkhole is below sea level and at sea, it will become a Blue Hole. 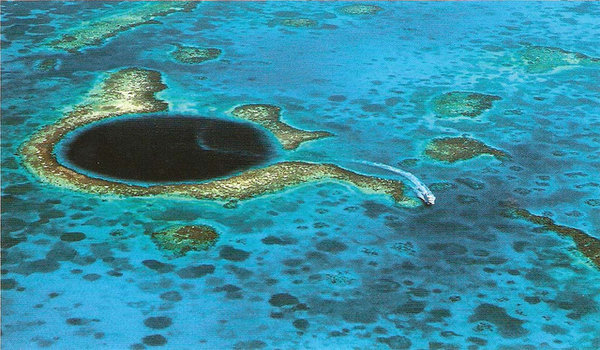 From an aerial view, a Blue Hole looks like a large dark blue circle in the middle of the sea, making it a truly spectacular phenomenon. The deep blue coloring is the result of reflections and color absorption of water. It is sharply contrasted by the paler teal, green, and blue shades of the surrounding waters which are much shallower.

Other famous blue holes around the globe include those off the coasts of the:

What Made the Great Blue Hole in Belize?

In the blue hole today, at a depth of around 35 meters, there are some stalactites. Stalactites are the result of mineral-rich water seeping into a cave. Therefore, during the times of growth, we know the cave was dry and above sea level. Samples taken from these stalactites have been key to establishing a timeline for the age of the cave.

One strange outcome of the study showed that sometime between the last two ice ages, there was an earthquake that tilted the cave by 12 degrees. Research also suggests that at the time the roof collapsed creating the blue hole, the cave was underwater.

What Can Survive inside the Blue Hole?

The shallow waters surrounding the Blue Hole, are rich in marine life with dense coral growth. The inside of the Blue hole stands in a drastic contrast. The sheer walls limit the amount of sunlight entering, creating a dim environment except when the sun is directly overhead. Poor water circulation restricts the number of nutrients available.

The combination limits the types of marine life that live in the hole itself. In fact, at certain depths, the water becomes anoxic, which means it does not have oxygen to sustain life.

Still, you can expect to swim through crystal clear water and encounter marine species that include sharks, like the Caribbean Reef Shark, and you may even see a Hammerhead or Bull Shark.

Today, the Great Blue Hole in Belize is about 300 meters in diameter and 124 meters deep. Like other blue holes, it is circular and breathtaking in appearance, Jacques Cousteau introduced the site to the public in 1971 on his television series and dubbed it one of the top 10 diving sites on the planet.

Jacques Cousteau was the first of many scientists who studied the hole looking for answers to many different questions. Recently, researchers using core samples taken from the sediment of the hole’s floor have created a scientific model that correlates climate change with the fall of the Mayan empire.

Why Should you Dive the Great Blue Hole?

After reading about the lack of marine life in the blue hole, you might be thinking “why go?”. This dive is not as much about the marine life as it is about experiencing the stark beauty of the site. You will start your dive in the reef alongside the hole and approach it like you would a wall dive. The rim is about 10 meters deep as it slopes till about 15 meters. There it drops straight down.

The drop is about where sea level was 8,000 years ago, and the coral life starts to end. While the light is dim and your eyes need to adjust, you will notice that the white sand far below you is reflecting some of the light back to you. Divers are instructed to stay close to the sides to keep from getting disorientated, and your attention is drawn to fascinating limestone formations alongside you as you descend.

As you head down, you get a sense of what a cave diver can experience. Suddenly you hit a thermocline, the temperature drops, and visibility improves, and a few meters below is the entrance to a recessed cave, “guarded” by 6-meter tall stalagmites and stalactites. Now you know what makes this a great site.

Should you schedule a day trip to the Blue Hole?

You will find dive operators in Placencia in southern Belize or in Ambergris Caye who offer day trips to the Blue Hole and the Lighthouse Reef Atoll.

But you need to know that these day trips are often only confirmed 24 hours before departure when the minimum number of divers signed up, generally 8 to 10, and when the weather conditions are good enough to make a safe journey.

Now your dream dive becomes dependent on the weather and if enough divers are interested in going on the same day you are. That sound a little “iffy” to pin your dreams on, there has to be a better way!

The trip to the Blue Hole from Ambergris Caye in Belize will take about 3 hours. From Placencia in Southern Belize, it will take up to 4 hours to get there. You will cross open water, where there is no protection from the surrounding reefs so even in good weather the trip can be rough. If you expect to get seasick, please be advised to take precautionary measures.

There are divers out there who will tell you that the hassles of organizing these trips and the time to get there and back make this dive not worth the trip. Facebook comments and travel review sites at times have very negative reports. Don’t let that put you off and read on to learn how you can dive this amazing dive the easy way.

“Nobody said that diving the Blue Hole was easy!”

Personally, I think the disadvantage of diving the Blue Hole from Ambergris Caye or Placencia is that in addition to the long boat ride, you will be diving with a big group, and you will not be “alone” by the time you get there. The other tour operators will be there as well.

Many bringing snorkelers in addition to divers. If the previous few days had bad weather, you could bet the boats will be filled as divers seize their last chance to dive the signature dive site of Belize. After the Blue Hole, the dive boat will head to another site for a dive or two.

As said, the Blue Hole dive is a signature dive and divers who visit Belize should do this dive when they get the chance. We spoke to a lot of divers who said the dive was OK, but they found the two dives that they made after the Blue Hole where much better. Most of the dive boats do a dive on one of the sites on Long Caye Wall, and a dive along Half Moon Caye Wall with lunch on the island between two of the dives.

I believe this is because by the time you hit the water you have spent 3 to 4 hours on a boat and when you finally dive the Blue Hole you are surrounded by groups of other divers. Diving the Blue Hole like this takes away a bit of the magic of this place. I can understand where they are coming from.

There is a way to do this dive with a small group and without a 3-hour boat ride before you hit the water. If you have 3 to 4 days to spend you might want to check in with the crew of Huracan Diving who are based on Long Caye within the Lighthouse Reef Atoll and only a 10-minute boat ride from the signature dive site of Belize

When you are looking for pristine diving in Belize and would like to experience the feeling of being on a small Island in the middle of the ocean surrounded by white sandy beaches, coconut palm trees, and crystal clear water, then Long Caye is the place to be. And if you ask me there is no better place in the world from where you can dive the Blue Hole.

A typical schedule for a Blue Hole dive from Long Caye

Now, when it is your time to dive the Blue Hole you and your group (max eight people) will be the first ones out there so you will experience the Blue Hole dive like it is supposed to be. And I am sure when people ask you how the dive was you will tell them it was AWESOME!

This article is written by RUSHKULT, the online booking platform for Scuba Diving. Visit the RUSHKULT platform to book your next Scuba Dive training, guided trip, and accommodation.
4.7/5 (3 Reviews)